The World: Playground of the Supreme

The world is not an illusion. It is the Vrindavan Leela of the Supreme (playground to relish His Divine Play of Love). Nothing is to be shunned or assumed to have the Truth. For you are all the while in It (Mahanam). That you have forgotten It, is the root cause of your misery.
Don't be a fashionable mystic. The world is real, of course with Him as the Reality.
The world is real and is in no way a dungeon, a purgatory, or a prison house. We have come here to taste the blissful rapture of His Manifestation. By doing our duties which come from His Will, we relish His Love and Bliss.
Father (Brahman) is Manifestation, Mother is Brahmamayi (of a piece with Brahman). Creation started with them.
Why not accept the saying of the Sruti (Vedas, scriptures), "God in His Supreme playfulness, by mere resolve, has been inclined to create the worlds and they were created forthwith." Vrindavan Leela (playground of Divine Love) cannot be displayed anywhere else except in this world.
No, no! The world is not non-existent. The reason is that only on this earth have human beings the right to savor His Taste and on no other planet. Even gods do not have that right. That being so, how can the world be illusory? Whatever you may call it, Maya or Yogamaya, it also has an Existence. Nothing is without Existence. It also is a manifestation of the Supreme Energy. But, the strength to make progress on the path of emancipation, realization and salvation out of the hold of this Maya, is also given by Him.
The spiritual world is a Reality and not a figment of imagination.
The Substance is One. You talk about materialism, spiritualism, etc. Try to change your angle of vision. Then everything will be clear. Just imagine the Origin of this universe, dive deep into the fundamental. This universe as we find it today, is the result of a long process of steady evolution. You proceed from the general to the particular. Your efforts will be successful only when you will be able to realize that Absolute Truth. There is a stage even before the sound. But ultimately, the general and the particular become identical. He, Who knows the underlying fact, is the Supreme Controller of all Power and Wisdom. Here the question of attainment (Siddhi) or observing austerities is irrelevant.
Nobody can challenge him (Dadaji), not only in this world. I tell you one thing, whatever he is seeing here, there are so many worlds....same thing. All temporary, everything is temporary.
Don't trust the world. But, it will be all right. I am always with you.
All the worlds are mutually exclusive. How can one go from one to another?
All the worlds are interrelated. So if there be unrest in the earth it will invade the regions like the heavens also.
Cycles (Ages) are measured by the consciousness of animal nature turned into self consciousness by humanity. The world is an organic whole. Even a plant or a fly is our Gurubhai (relation in Truth, having God within).

The solar system can be penetrated in a moment's thought. By His Supreme Will, by which crores (ten millions) of universes get created, cannot it become possible to go around the Infinite Space in an instant? Science is able to create space vehicles and go to the moon. It can also go to the other planets. You know, people have in fact gone there in earlier times also. In the past, there were fast space vehicles. People have been to the interplanetary space. This is nothing new.  These kinds of planes (Unidentified Flying Objects, UFO's) were there before. Now also, they are there on other planets. On those planets their speed is forty to fifty thousand miles an hour in soundless conditions. They can rise straight upward without the need of runways, somewhat like helicopters. What you cannot see, you disbelieve. But, what is the extent of your seeing ability? If a person comes and stands close in front of your eyes, you will not be able to see the face properly. And again, on going very far away you are unable to see it properly. Sight is such that only if the person is neither too far, nor too near can the face be seen properly. Still further, whatever you see is seen shrouded by Yogamaya (Divine Creative Power). Falling under the influence of Yogamaya, one gets deprived of the enjoyment of His Taste.  It is Mahajnana (Supreme Knowledge) that flows along encircling the countless worlds. Manifestation of God, Himself, is the universe. In your language, that Supreme is the Poet and this universe is His Poem or Song. Tune alone does not express full feeling. Similarly, poetry alone cannot enrich fully without music. Actually, there is no difference between flower and bud. 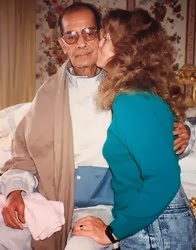