What is charity after all? By doing charity, one gives indulgence to indolence and evil propensities. On the other hand, the ego of the donor is intensified.
Are not charity and prostitution the same? Are the gifts of Nature I have acquired my property? Who has given me the right to misuse them?

Money raised for temples and Ashrams is no Dakshina (offering to God) in the true sense of the term. This takes one far away from the goal. Dakshina is actually the remembering of Mahanam, for His Name and He are identical. There can never be a (business) transaction between a thing of the relative plane and that of the spiritual plane.
Have we anything to give Him, our Father? Can the Almighty, our Father, expect any Dakshina (offering of money, flowers, etc.) or earthly offerings from His Children? Decidedly not. If we can attune ourselves to the Mahanam that we received with birth and submit to Him, this at once becomes the only form of Dakshina. For He alone is the Giver, the rest are all seekers.

What is sacrifice (Yajna)? Does sacrifice take place merely by burning tons of wood and Ghee (clarified butter used in some religious rites)? One has to offer oneself as oblation. This offering must be done so secretly that a second person cannot know about it. Can sacrifice be done with putting on of pompous display? That is only self-aggrandizement. The real sacrifice is inner sacrifice. This is only an inner treasure. In this inner gratification He is present. Is sacrifice conducted by beating drums, pealing bells, collecting people?
Work itself is sacrifice.
Sacrifice is above charity. Charity is giving away as to one's own self. Sacrifice is, however, quiet Swabhava (natural attunement with Supreme Truth). Penance is of a very low plane.

The whole life is Yoga. Yoga means to be united.
To see the form as situated in one's own Reality is called Yoga. Have you understood? In the substance is the Light of the form and then again, that of the formless in the form. Again, the coming and going of the form out of and into the formless takes place in Existence. That indeed is life and death. That is why to be firmly situated in one's Reality is named Yoga. Putting one's head down, legs pointing to the sky, performing various kinds of mental and physical gymnastics, does not enable one to anchor oneself in Reality.
All this Yoga, Tantra, scriptures are full of misunderstandings, all strange practices. Truth is outside the reach of the mind. By no means can you get Him through rituals, only through Love.
Yogis and Ashrams are only farce for moneymaking business.
Not through the arithmetic of counting of beads, or through multiform penance, or Yogic practices can one reach Him, even in crores (ten millions) of years.

You do not reach Him by performing physical and mental gymnastics of so-called Yogis and Tantrics. They have the biggest egos! They are only looking for transitory personal power and so doom themselves to greater bondage by inflating their egos. Yoga is such humbug. I consider all these complicated body postures ostentatious self-torture. It is not even a good technique of relaxation. Swimming is far more relaxing. Also, going for walks. Smoking cigarettes also relaxes.
If you practice Asana (Yoga postures) you may acquire a sort of power, as for instance flies will not touch your body. But, such powers go off. Be always with Nam. Then the objective with which you have come here will be realized.
Perfect and absolute self-surrender to God and a constant desireless or choiceless awareness of Him charged with single-minded devotion and reliance, is the only perfect or real Yoga. Since then God takes over the entire responsibility for our lives, works His own Divine and Infallible way, and Captains the ship of our Life to its final destiny, realization of our True Nature.
With His Touch your work will be All-blissful, All-joyful. Sadhus and Yogis want to attain this state by efforts, rituals, meditations, and austerities. But they cannot get His Love, a real joyful state. A person gets it only by the natural process of living. Even the Yogis, who try to get it only by austerity, if they ever get anything at all, they get only dry, tasteless, insipid superstitions. 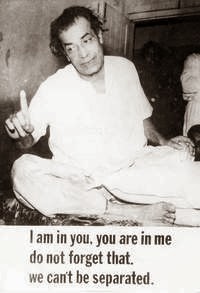